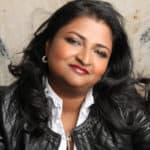 A wife and mother, Sharmila Wijeyakumar enjoys serving others, traveling and spending time with friends and family. She has a bachelor’s degree in interpersonal and organizational communication from Purdue University, with minors in psychology and management information systems. A senior account executive at Liferay, Sharmila has a long and distinguished career in enterprise software sales, with a specialization in new market launches. She has been honored in the Who’s Who of Professional Women in IT.  A published author, she enjoys helping tech start-ups. Whilst pursuing her software career, she dedicated her life to God, and to ending human trafficking, including work globally to reduce the number of child trafficking victims in thirteen Spanish-speaking countries. Sharmila is widely recognized as COO and co-founder of Rahab’s Daughters, a nonprofit organization that rescues, rehabilitates and reintegrates victims of human trafficking. Selected as one of CRN magazine’s Women of the Channel four years in a row (2010-2014), the Daily Ledger also named her one of the most Influential Women in Suburban Chicago. In 2017, she won a Stevie award for Female Executive of the Year. Sharmila spreads joy and compassion wherever she goes.

The story of a woman who overcame her checkered past with the voice of God as her guide and has created a ministry to help others join the fight against human trafficking, better known as modern day slavery.