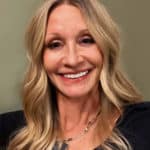 Brenda was born into a Christian family in Grand Rapids, MI, on Valentine’s Day, 1954. From kindergarten until the day she graduated from Calvin College with a BA in sociology, she attended Christian schools. Brenda believes that her strong Christian foundation shaped her life in a positive, wonderful way.

Brenda moved to Chicago when she was in her late twenties. Quite by accident, she got into the flooring business and stayed there for the better part of twenty-five years. She was a marketing rep for Amoco Fabrics and Fibers and Wools of New Zealand, and a sales rep for Nourison Industries. All of these positions involved extensive travel, so she learned to organize her schedule, manage her time, manage a budget, and work by herself with little supervision.

In 1991, she married for the first and only time. They were happily married for many years, but his adultery ended the marriage in 2007.

For the last three years, she has been happily retired. Brenda has always loved animals, so she recently decided to become a guinea pig mommy. She currently has five of the adorable little rodents. Her goal is to write a series of children’s books chronicling the lives of her piggies.

Since she no longer travels for work, she now has the time to volunteer at church and attend daytime Bible studies. She especially enjoys serving in the nursery on Wednesday mornings.

Her other two passions are classic rock concerts and leisure travel. Although she still has a long bucket list, she tries to take a major trip every year. Some of her most fun adventures have occurred in New Zealand, Egypt, Israel, Dubai, Bora Bora and Italy. Regarding classic rock, she usually attends between five and ten concerts every year.

A Near Death Experience Saved My Life

On August 15, 2009, Brenda was involved in a horrific boating accident. The boat she was in collided with another boat, causing her boat to capsize. She was trapped underneath it, and it was estimated that she was under water for six to eight minutes. It took marine unit officers ten minutes to resuscitate her.

For the next three months, Brenda was out of work and extremely depressed. After two hospital stays, one surgery, two rounds of physical therapy and home stays with two different friends, she made a miraculous recovery.